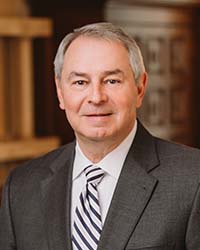 Mr. Simmons is the former United States Attorney for South Carolina, appointed by President George Bush in 1992. He was the youngest U.S. Attorney in the country, in charge of all civil and criminal federal cases in the entire state.

He founded Simmons Law Firm over 25 years ago, where he now focuses on catastrophic personal injury, wrongful death, products and pharmaceutical liability, premises liability, medical malpractice and white-collar criminal defense. Mr. Simmons has tried civil and criminal cases across the state of South Carolina and elsewhere upon special admission. Prior to entering private practice, Mr. Simmons prosecuted state and federal criminal cases as Chief of the State Grand Jury and as an assistant United States Attorney.

Mr. Simmons has received numerous accolades for his legal achievements, including recognition in Best Lawyers in America for seven consecutive years and South Carolina Super Lawyers for over a decade. He has held Martindale-Hubbell’s highest AV rating for thirty years.

In the process of achieving a distinguished academic record at the University of South Carolina School of Law, Mr. Simmons was a member of the Law Review, the Order of the Coif and Order of Wig and Robe, the regional Mock Trial Team and the winner of the J. Woodrow Lewis Appellate Advocacy Award. Following law school, he served as law clerk for the Honorable William W. Wilkins, formerly Chief Judge of the United States Court of Appeals for the Fourth Circuit.

Away from the office, Mr. Simmons enjoys spending time with his family, including his new granddaughter. He loves the outdoors and can often be found enjoying his farm in the South Carolina low country. Mr. Simmons also enjoys all sports. He was a walk-on letterman on the 1981 University of South Carolina baseball team, which finished fourth in the College World Series. For several years, Mr. Simmons was an assistant coach on a local American Legion baseball team.