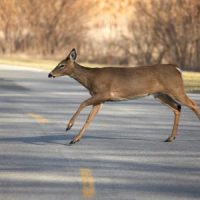 Seeing animals on the roadways is a common occurrence in South Carolina and all throughout the country. Deer, squirrels, dogs, cats, birds, and other animals can suddenly run out in front of drivers with absolutely no warning.

While you might not really think about the impact of hitting an animal while driving, it can be a huge safety issue. Every year, there are more than 260,000 crashes involving animals in the United States. These crashes cause roughly 12,000 injuries to humans. On top of that, more than 150 people are killed.

Most Common Animals on the Roadways

Given that there are more than 30 million deer in the United States, it’s no wonder that these creatures are the most commonly found on American roadways. Deer are also large animals, sometimes weighing more than 300 pounds. Hitting a large animal at high speeds can lead to heavy damage to your vehicle damage, while also causing serious personal injuries.

In most states, the most commonly hit animals are deer. Birds are also commonly hit, with 340 million killed every year. High speed limits and wider roads have contributed to this.

Also common are squirrels, dogs, cats, rabbits, raccoons, and skunks. You can avoid hitting these animals by looking for warning signs, slowing down, driving defensively, and determining whether or not it is safe to swerve.

Neighborhoods tend to be the most dangerous areas for hitting animals. Country roads can also be dangerous, considering that these areas are more rural and speed limits are usually higher. There are usually not as many animal-related accidents on the highways, although cats, rabbits, coyotes, foxes, and turtles are commonly hit. However, drivers are most likely to hit squirrels, which can be found in every location.

Nearly 80% of drivers have had a “near-miss” moment with an animal on the road. This can be devastating, since nobody wants to hit an animal. These situations can happen quickly and you may not have enough time to make the right decision. The right decision is the one where everyone is safe. However, make a bad choice and you could end up injuring or killing the animal as well as passengers in your vehicle.

Most drivers choose to swerve but stay on the road. The second most common decision is to hit the brakes. Whatever you choose, do it safely. Swerving can cause you to go off the road or hit another vehicle. Braking suddenly can cause you to lose control or get rear-ended by a vehicle behind you. Unfortunately, hitting the animal is sometimes the safest option.

Deer, cows, horses, and other animals can cause serious collisions with vehicles. These crashes can cause a variety of injuries.

A Columbia car accident lawyer from Simmons Law Firm can help you get the compensation you deserve for your damage. To schedule a free consultation, fill out the online form or call (803) 779-4600.

By Simmons Law Firm | Posted on March 31, 2022
« Slips And Falls In The Workplace
Sexual Assault Awareness Month: What To Know »